In the low sunlight of this November morning, two couples of F-4E’s belonging to 338th Mira “Aris” unit slide away as if in a silent movie for one of the first missions of the day; further on my right, an “Aegean Phantom” is returning to its HAS in the area that just few months ago belonged to 339th Squadron; an F-16 D Block 52 of 337 thMira “Ghost” of Larisa AB at last chance point waits for an F-16 D of the 330th Mira to free the runway. The personnel in the Apron Delta is around their eight F-16’s C/D, to prepare the wave of mid-morning, carrying out all the checks of the list.

Andravida is home to the 117th Combat Wing of the Hellenic Air Force and KEAT (Kentro Aeroporikis Taktikis), but on the base there are also other aircraft belonging to all greek fighter squadrons.

The FWS (Fighter Weapon School) is a joint school that provides training for professionals of all the greek armed forces. The focus is on air-to-air, air-to-surface and electronic war tactics. The aim of the school is to provide the best training to the best pilots, to make them become an elite among the pilots of their Air Force. The course lasts about three months, including a course for “mission commander”, one for helicopters and one to become “best pilot”. Students are carefully selected from almost every combat specialty drawn from across all the frontline squadrons: they will have above average experience: they bring here their own aircraft, as KEAT does not have its own assigned aircraft, at least one combat aircraft of each type is temporarily based at Andravida for the duration of the course, total of 10 to 15 aircraft. 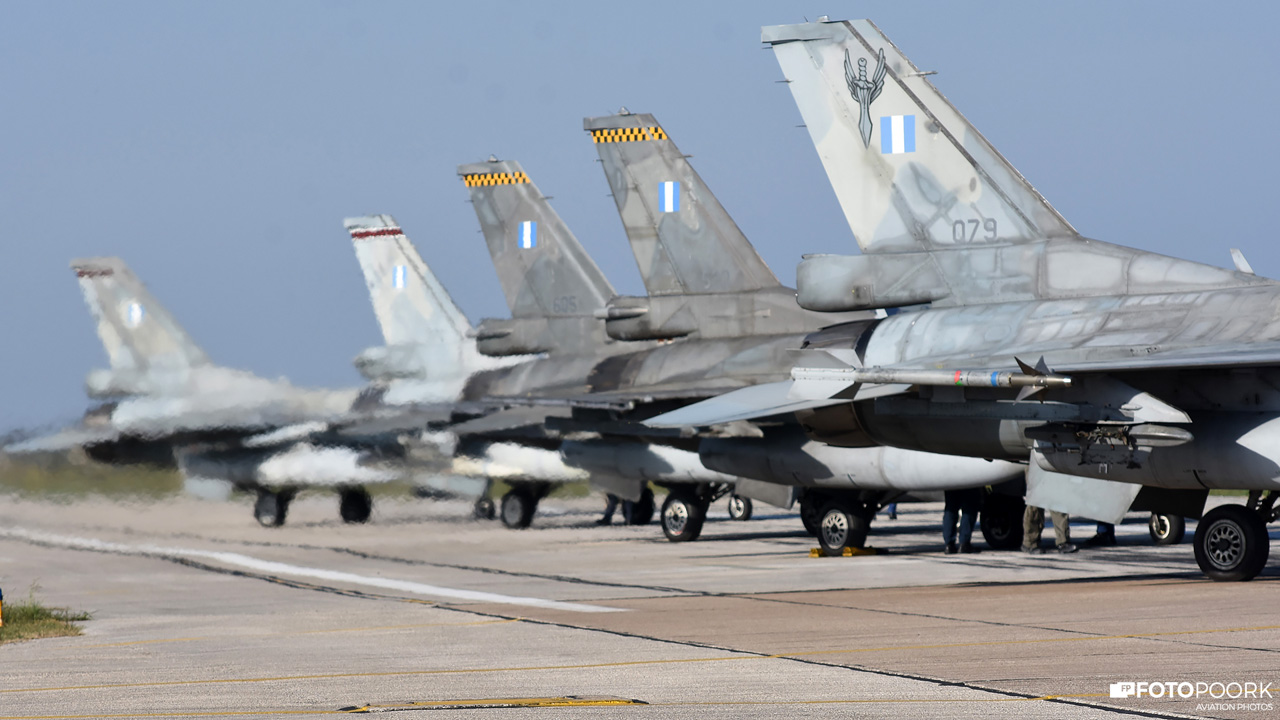 Only the best can enter the school, up to the squadron commander the choice of the pilot to send here: he will surely select the man with the best experience, one who had no accidents at all, the best in the group, one of the firsts on his list. To become an instructor of fighter pilots a different course is organized. Some pilots already have experience, others start from scratch. After passing the exam in this school, the pilot will become an instructor pilot of the Weapon School. Exactly as we saw in the famous movie “Top Gun”. Having about ten instructors permanently assigned to KEAT, these pilots are selected from those that have excelled at a previous SOT course. Almost every course discovers a potential SOT instructor. SOT instructors are either senior majors or senior captains and have attended Red Flag exercises in the USA and the NATO TLP.

The Fighters Weapons School mission is:

FWS provides academic training to train staff on operational and specialized subjects and at the same time to continually seek and further improve. It takes the form of educational courses and seminars at the headquarters of the school, or lessons learned, which are issued after the completion of each training course. Thus the following training fields are covered:

The training here is more realistic with more and varied assets which are used by experts. Having aircraft of every type and ground air defence, it is very challenging for pilots to reach their goals, they know they have to give all, because failing to prepare, is preparing to fail.

There is a polygon in the west of Andravida, a large training area, a good theater of operations, quite extensive in length and width, without altitude limitations, either vertically in the sky, or at low altitude. This is the best area to fly, go supersonic or low-level, the best you can have. The twenty-one sorties chosen for the course, range from simple two-to-two missions, in order to familiarize themselves with the objectives of the course, and then proceed to two-on-four, four-on-four, COMAO (Combined Air Operations) missions and then many against many, at night, during the day and at low altitude, in an environment where there are terrestrial threats that also include surface-to-air missile systems.

The KEAT is a unit of true excellence inside the Air Force: over time it could fill a great gap that had arisen in areas of operational projects, evaluation of weapons systems and in the design of specialized exercises, mostly of an interforce type. KEAT has become a valuable advisor on many operational issues, being the place where you can experiment and evaluate, in maximum safety, both the new air combat tactics and the new weapons or electronic warfare systems, in a professional setting with the highest standards.

Of particular importance is then the training activity carried out both for the personnel of the Hellenic Air Force and for that of the other armed forces, but,  since the main mission is the study of aerial tactics, the most important courses are: the FWS (Fighters Flight Course), the FWS COMAO Planning Course, the FWS Helicopters vs. Fighters Flight Course , the FWS Test Pilot Seminar, the FWS Weapon Engineering Seminar and the FWS Intel Course.