The 150,000 visitors who flocked this weekend in mid-July on the base of Fairford in the Cotswolds attended the largest U.S.A.F aircraft meeting , as we had not seen for years.

I would add that the Americans have taken steps to save the most famous show in the world from mediocrity in which it has been debating for some years. Even the Italian Air Force and the Armèe de l’Air have largely contributed to the success of this event, in second place after the Americans and, I would add, without ever receiving a reciprocation from the British, except for the Red Arrows, I would say, with a vein of malevolent pride and a desire to be treated equally. The purpose was to support the Royal Air Force Benevolent Fund? Well, mission accomplished.

The Thunderbirds have been the masters, they ruled the roost, performing without sparing every day, since the Tuesday that preceded the Tattoo, when they took off  to Le Bourget to familiarize with that area in anticipation of the Salon International de l’Aéronautique et de l ‘Espace. A B-52H Stratofortress arrived on Tuesday and positioned itself in the public area, followed in the following days by the B-1 Lancer, by the Raptor F-22, by the U-2 and by the B-2 that flew over Fairford, arriving  from Whiteman’s base after a 23-hour flight on a training mission, escorted by 2 F-15; 2 CV-22B Ospreys, have shown themselves, the exhibition in flight was superb. In the static exhibition the F-16 of ‘Spang’ and the F-15 ‘LN’, 2 Mig Killer, a MC-130J of the Commando II Tactical Transport, a C-17 Globemaster arrived directly from Charleston, South Carolina, who joined to other British C-17 heavyweights and A400s. The United States Navy has sent the new maritime patrol boat, the Boeing P-8A Poseidon, which in 2019 will wear the colors of R.A.F. based on Lossiemouth in Scotland. 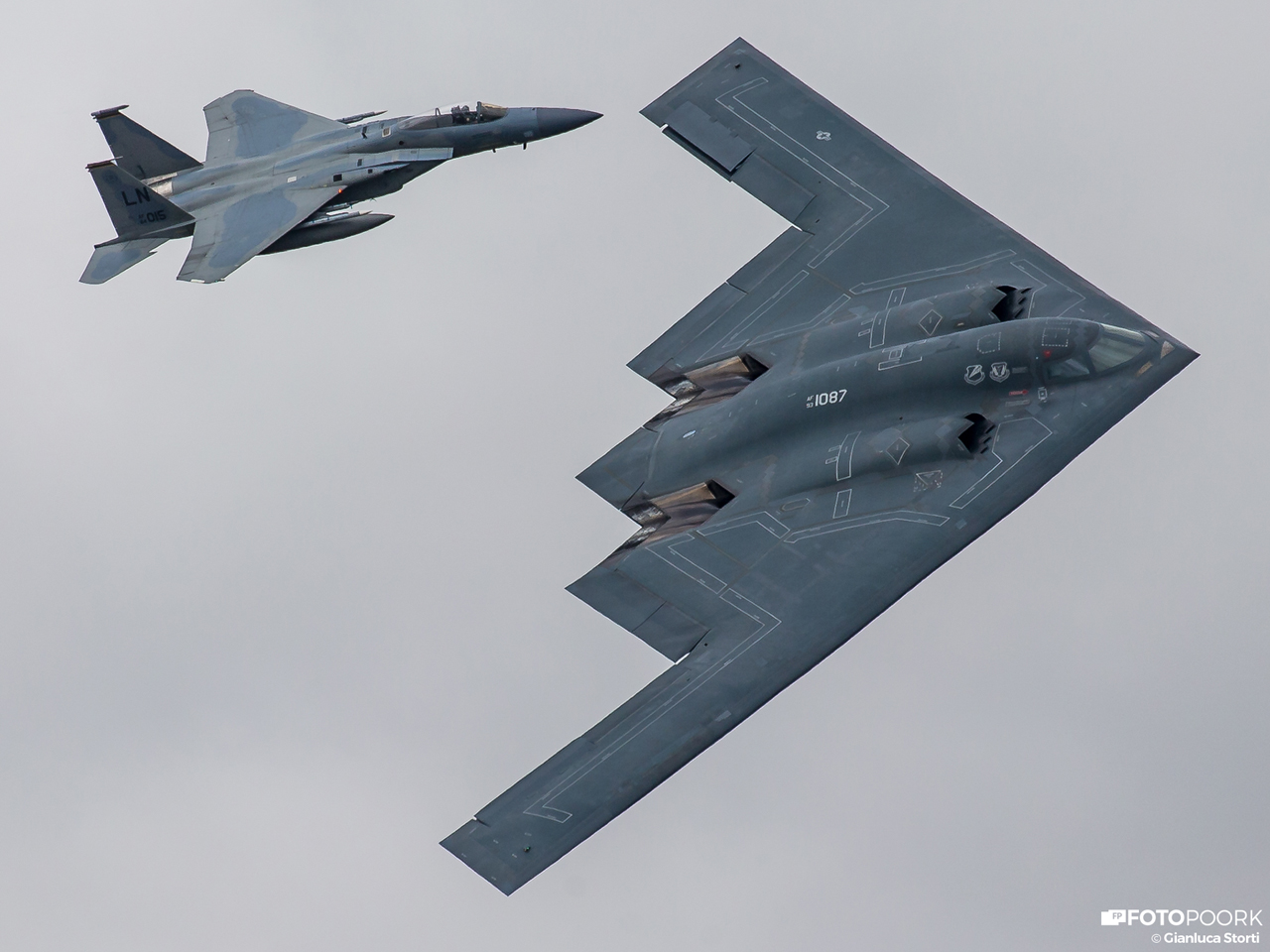 At the key moment of the celebration of the 70th anniversary, F-15’s overshot directly from Lakenheath, together with F-16’s of Spangdahlem, the F-22 paired with the Mustang P-51D “Frenesy” in multiple passes..

The Air Tattoo spokesman Richard Arquati pointed out that “The Air Tattoo has a special relationship with the U.S.A.F. which dates back over 40 years; in all these years this has led to truly memorable tributes, milestones in the history of Fairford. Earlier this year the US military authorities had promised us their full support to celebrate the 70th anniversary of their aviation here and now we see it with our own eyes, the best of the best is here and it’s fantastic. ”

In fact, we must go back to 1972, when the Americans allowed the first Air Show called ‘Air Tattoo’ to take place on the basis of Greenham Common, near Newbury in Berkshire, then missile site, home of the 501st Tactical Missile Wing: The Soviet deployment of missiles, particularly the SS-20s, had caused great concern in the NATO alliance that responded by deploying just under 200 missiles based on Greenham Common (and others elsewhere). From 1973 to 1983 it took place here intermittently, initially under the title “Royal Air Forces Association”, South Eastern Area, Air Tattoo before moving to RAF Fairford in 1985.

But if on one hand it is true that the highlight of the show was the U.S. Air Force, the other air forces, present at Fairford, provided the color for the show; and without color, would  a large part of the public have come? My answer is obvious, but maybe, as the product managers say, I’m not part of the right ‘share’. I see that every air force that has given its contribution, whether big or small, has brought its best here. A large number of aircraft with commemorative liveries were present: the new Australian E-7A electronic Wedgetail, the Pakistani Hercules, the Mirage and the French Rafale, the Germans with the Eurofighter of the TLG-74 and 73, the Tornado of the TG-51 and the Transall 160D of the LTG-61 the Tornado of the 311st Flight Group of the Experimental Flight Unit – which was awarded for the best livery among all the participating aircraft -, the Ukrainians with their Su-27 Flankers of the 831st Tactical Aviation Brigade and others like the Japanese arrived at Fairford for the third consecutive time. The daily display saw the French Cocteau Delta on the Mirage 2000D, the Finns Midnight Hawks, finally in a new livery, simple and original. Even the Israelis, after a 15-year absence, returned to Fairford aboard a new Shimson C-130H of the Sqn. 669, after a mission of 8 hours and more, carrying on board a large team of technicians, media, personnel of foreign affairs, security and specialized paramedics. The Herk carried specialized equipment for medical support, basically a flying hospital with personnel with different types of specializations, from scuba diving to blood-taking and CPR. T.Col. Richard Hecht, Head of Foreign Affairs of the Israeli Air Force, said: “It is also our 70th birthday and we discover common interests and values ​​with the British forces.We are pleased to be part of a great air show and we fully enjoy it As we also enjoy this British climate when at home we currently have 40 ° . T.Col. Hecht is at home in Great Britain because he was born in Glasgow: his family moved to Israel when he was eight years old and still has a strong Scottish accent. 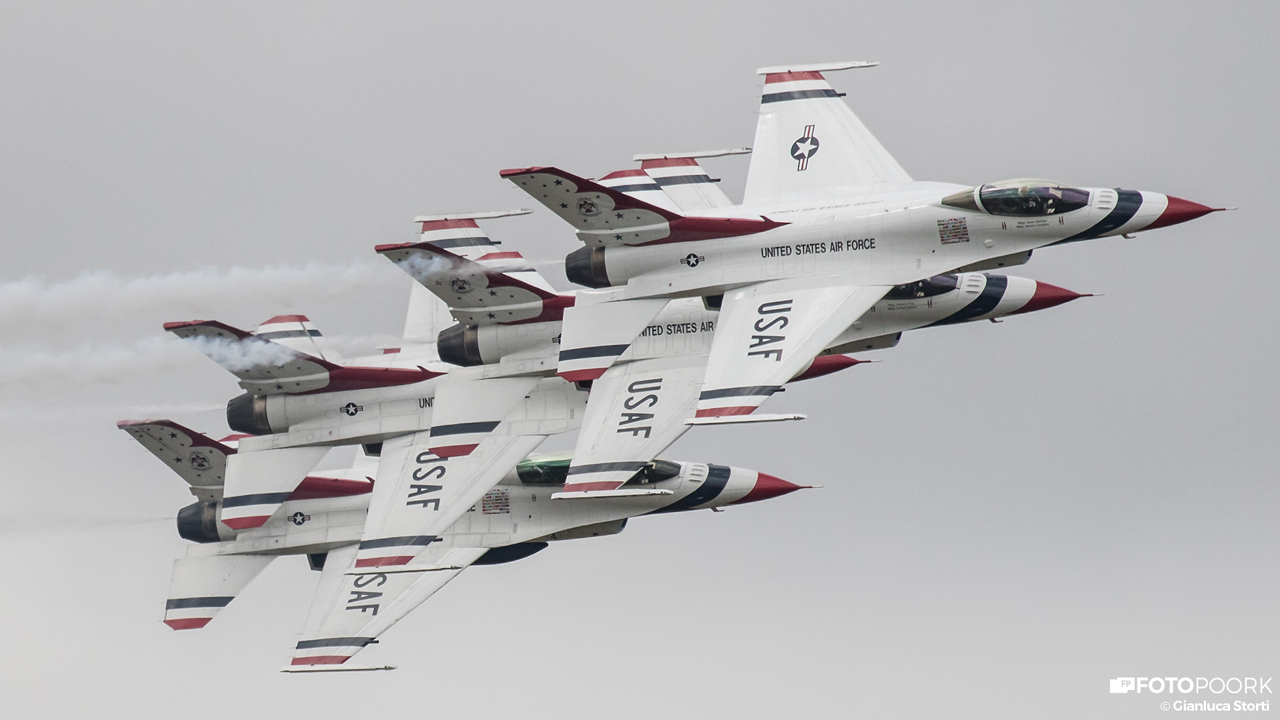 “It’s nice to come back here and be part of a world-famous air show”. In total, 246 aircraft of 32 different units performed, representing 26 nations in front of a public of vips that could count on the presence of HRH the Duke of Gloucester, the Secretary of State for Defense Sir Michael Fallon, the Chancellor of the Exchequer Philip Hammond and the United States Ambassador to the United Kingdom Lewis Lukens. Among a large number of industry guests, there were BAE Systems president and CEO Sir Roger Carr and Charles Woodburn; the CEO of Lockheed Martin, Marillyn Hewson; Dave Perry, Chief Global Business Development Officer of Northrop Grumman and CEO of Boeing Defense Leanne Caret; among the military guests Chief Marshall Sir Stephen Hillier and the Chief of Staff of U.S.F. David Goldfein.

In total, a record of 63 military delegations participated in the event, representing air arms coming from around the world. Alas, the best overshoots and short take-offs took place in front of their chalets and not before the F.R.I.A.T. Enclosure or the press area, especially neglecting the paying public positioned towards the end of the track to the west. Last year I pointed out these flaws and others about the show in the Media Press Center but as I saw, with poor results.

As our Vasco Rossi ( a most famous rock singer – in Italy at least -) says in one of his well-known corrosive songs ““ Non siamo mica gli Americani, che loro possono sparare agli Indiani”.  Not a perfect italian, I admit. But tough and rough…  “We’re not Americans, that they can shoot the Indians”.

Alright, alright, I change my route.  I will take shelter in a moment of a different ‘color’, talking about the Russians, ups …sorry,  of the Ukrainians: I was chatting with my dutch friend Hans Koning about his books on the F-104s,a milestone for the serials collectors,  when the two Flankers escorted to Candid Il-76 showed up from the east, in a three-part formation, announced by the various radios tuned to the frequencies of the tower: Hans lights up, Hans interrupts his speech to tell me in English that there is a Ukrainian officer in the tower that acts as a bridge between the controllers in the ATC and the pilots of the Ukrainian fighters who do not know English: once landed, the Ukrainians are instructed to come towards our park & view area. First the Candid, then the Flanker, …. opening, landing and .. Hans abruptly abandons his refined English and his smile, blurts out in Dutch something that I did not understand and that if I had understood, I could not have written: the Ukrainians (  No Martini ? No party! ) … they headed for a taxiway to a different place, far from us.