On the base of Poznan-Krzesiny the NATO exercise called “Tiger Meet”, which began on May 14, ended on May 25th. I had prepared since so long to attend this event, because ‘you never know’, something always happens: I have to be ready as the Sgt. Gunny Highway says “You improvise .You adapt. You overcome.” – from Clint Eastwood’s movie “Gunny. 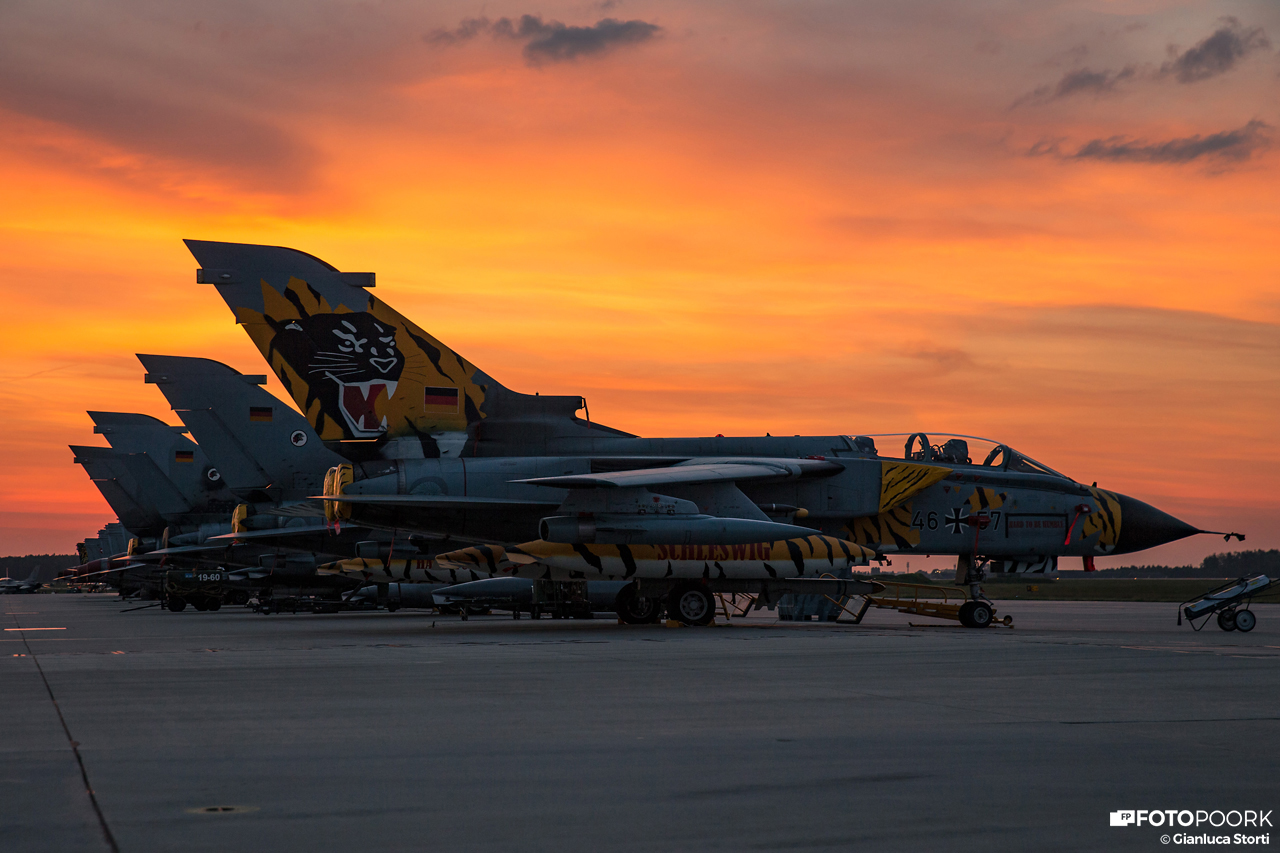 Arriving in Poland, we got onto Poznan Krzesiny AB, which is truly spectacular, despite it’s compact size. We are inside, on the flight line, roaring engines, some Spanish EFAs waiting in front of the Apron C, four Rafale in front of the tower, the Belgian F-16s are going to free the taxiway for runway 29.

Hot exhaust engines and cold air in the morning: the day is not exactly what we want. Cold, windy, it seems geared to the worst. The afternoon does not improve, from the east a dark front comes, only a small hope a thread of pink light, low on the horizon. 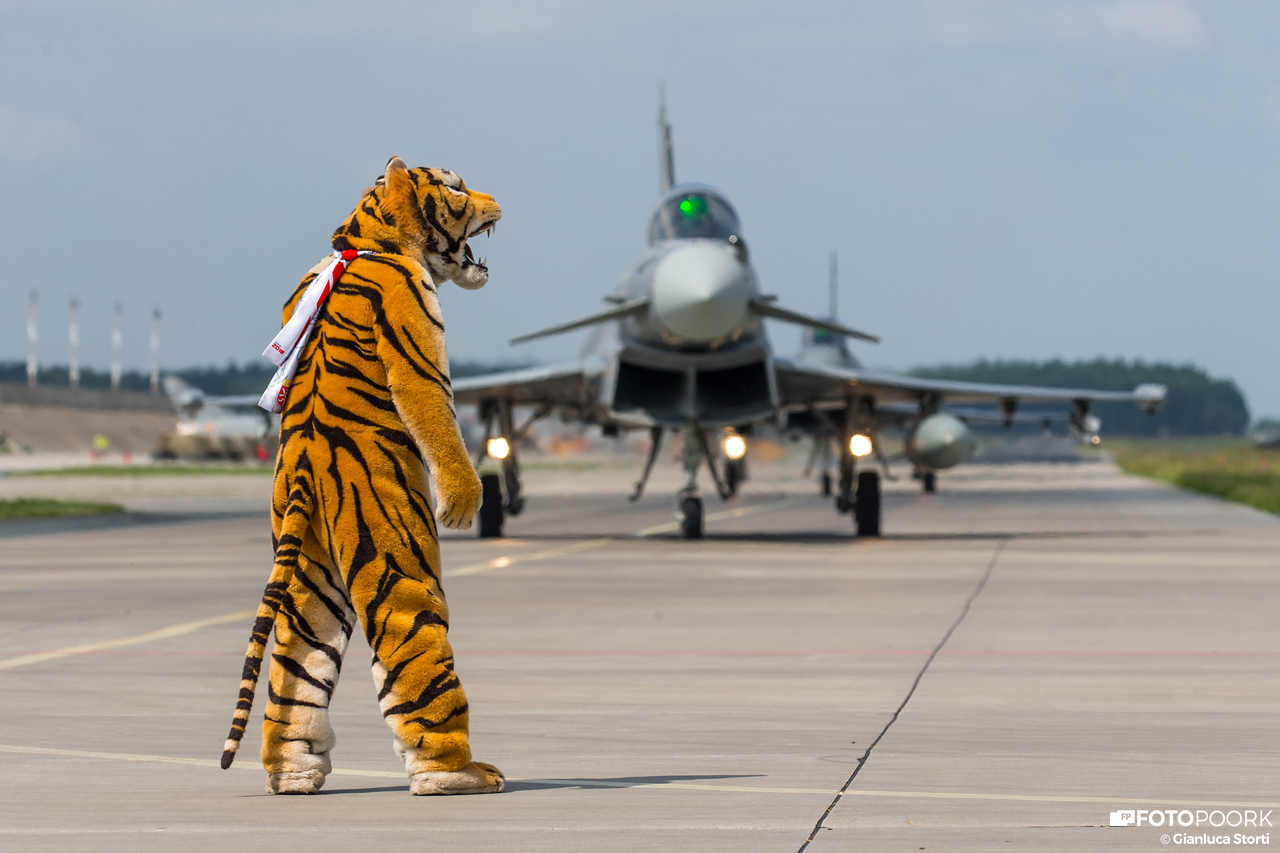 A blade of sun, like alabaster of a delicate pink white, rises, gains space in the clouds, crossing for spaces cleansed of all impurities, the sky is clearer, the red evening advances. There is a star that shines like a diamond and the moon comes out full …. The afternoon missions are now over, but all the planes lie in a fiery sunset. Franco’s eyes shine for the occasion to be seized; photos to no-end. The night begins, it’s 9.30 pm when we get back to the car. The first day is over.

The Poles proved to be up to their task, organizing this Tiger Meet: it was heavy, hard, hard. Giving logistical, organizational support to the groups of the 14 participating air forces was very demanding. 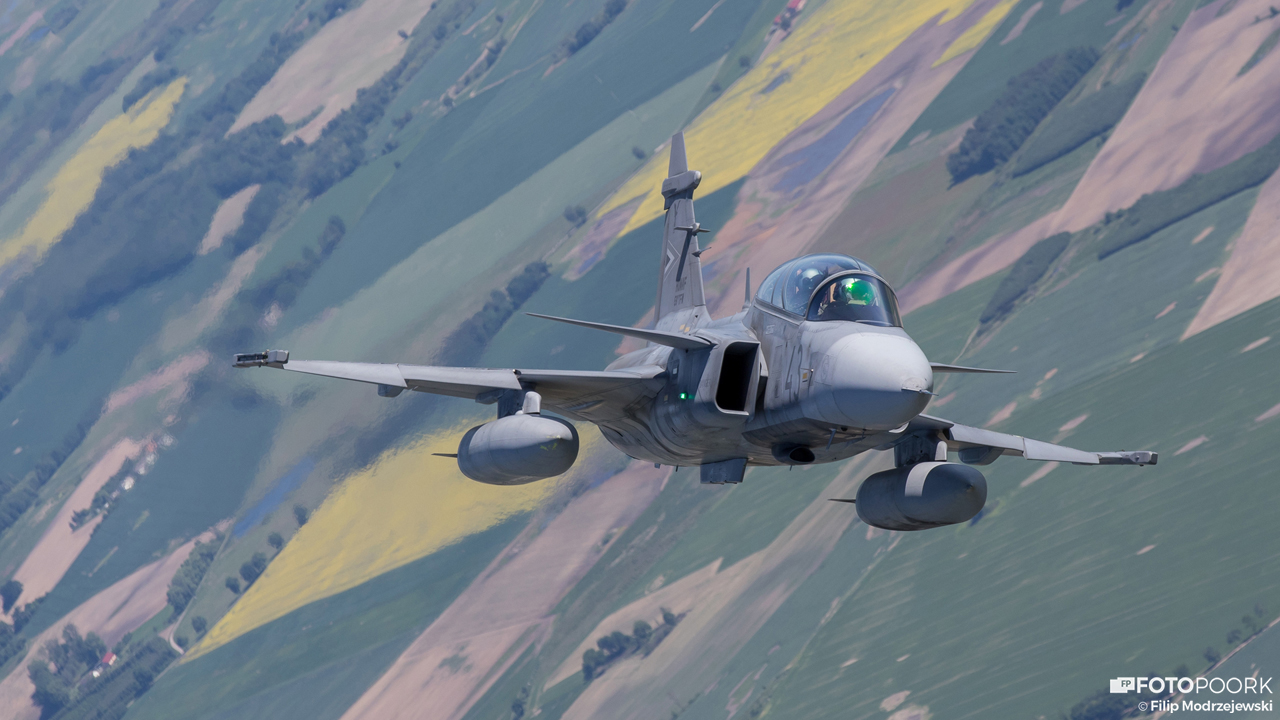 The Poznan-Krzesiny airport is not that big. In the area to the north-west of the runway, a large area has been built with shelters for the F-16, fenced according to the rules followed in the American bases, which separate the various subsections of the same compound with fences and controlled entrances basis. Instead shelters in the north-east, practically in front of the control tower and beyond the runway 29, there are still shelters belonging to the period of the cold war and the iron curtain, built according to the Soviet model.

The spaces for the aircraft have therefore been chosen and assigned with care, occupied all areas of the south area, i.e. on the side of the tower. The north-west area, the area of the Polish tiger group, the 6 Eskadra Lotnicza now houses all the F-16s of the advanced flight school, which usually occupy the 14 shelters facing south-east. Now they host 4 F-16 C/D Block 52+ of the 335 Moira of Araxos, 5 Rafale of the French Navy and the 3 Austrian Saab 105. 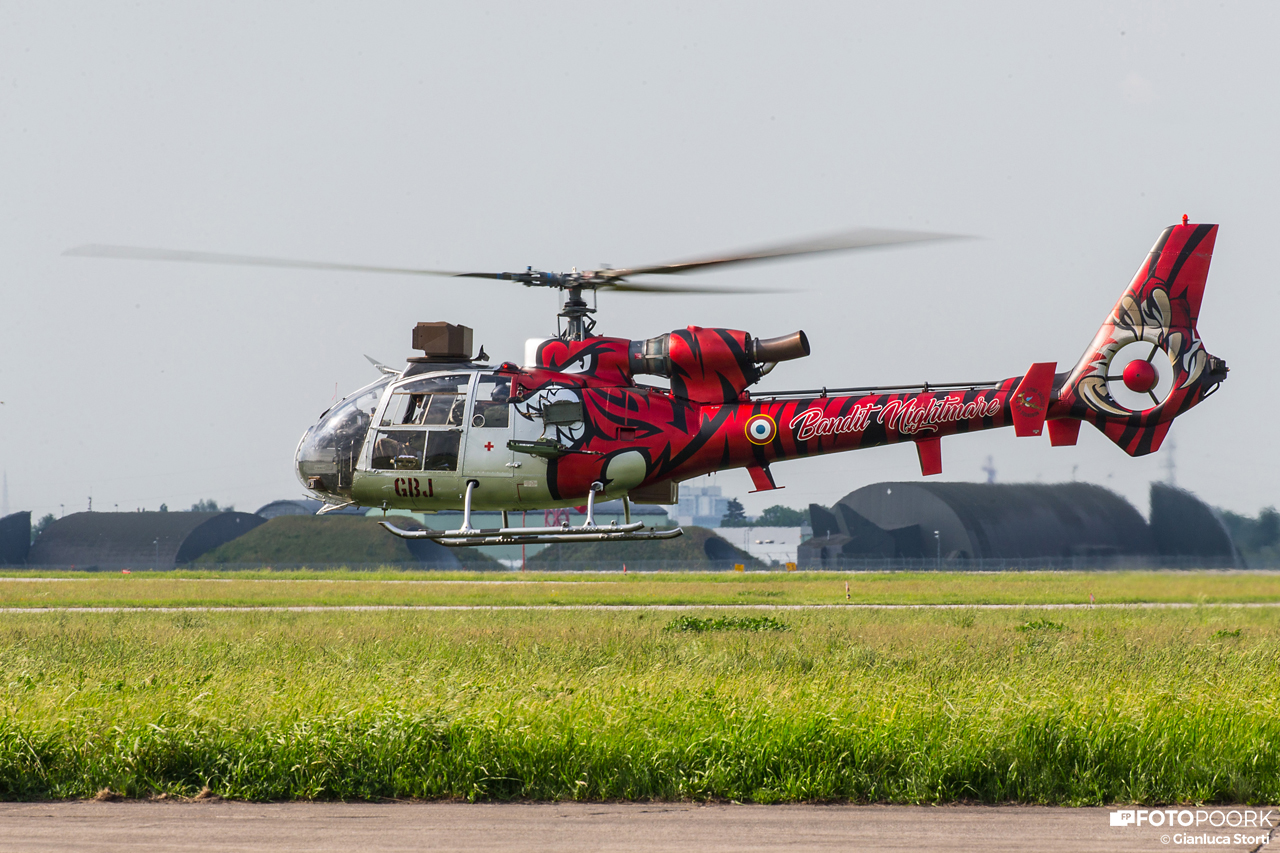 In the green of the meadows between these shelters and the runway, the helicopter components:

On the taxiway that leads onto runway 29, are the 4 Saab JAS-39C and D Gripen of the 211 Takticka Letka of the Caslav base of the Czech air force and 5 Gripen of the 59th Wing of the Szentgyorgyi Dezsò base of the Hungarian air force.

On the left of the control tower, looking at the runway, is the area reserved to the Eurofighters: the 4 of Gioia del Colle’s 12th, the 5 of the 142nd Spanish Esquadròn of Albacete and the 4 of the Taktisches Luftwaffengeschwader 74 “Bavarian Tigers” of Neuburg to Donau. 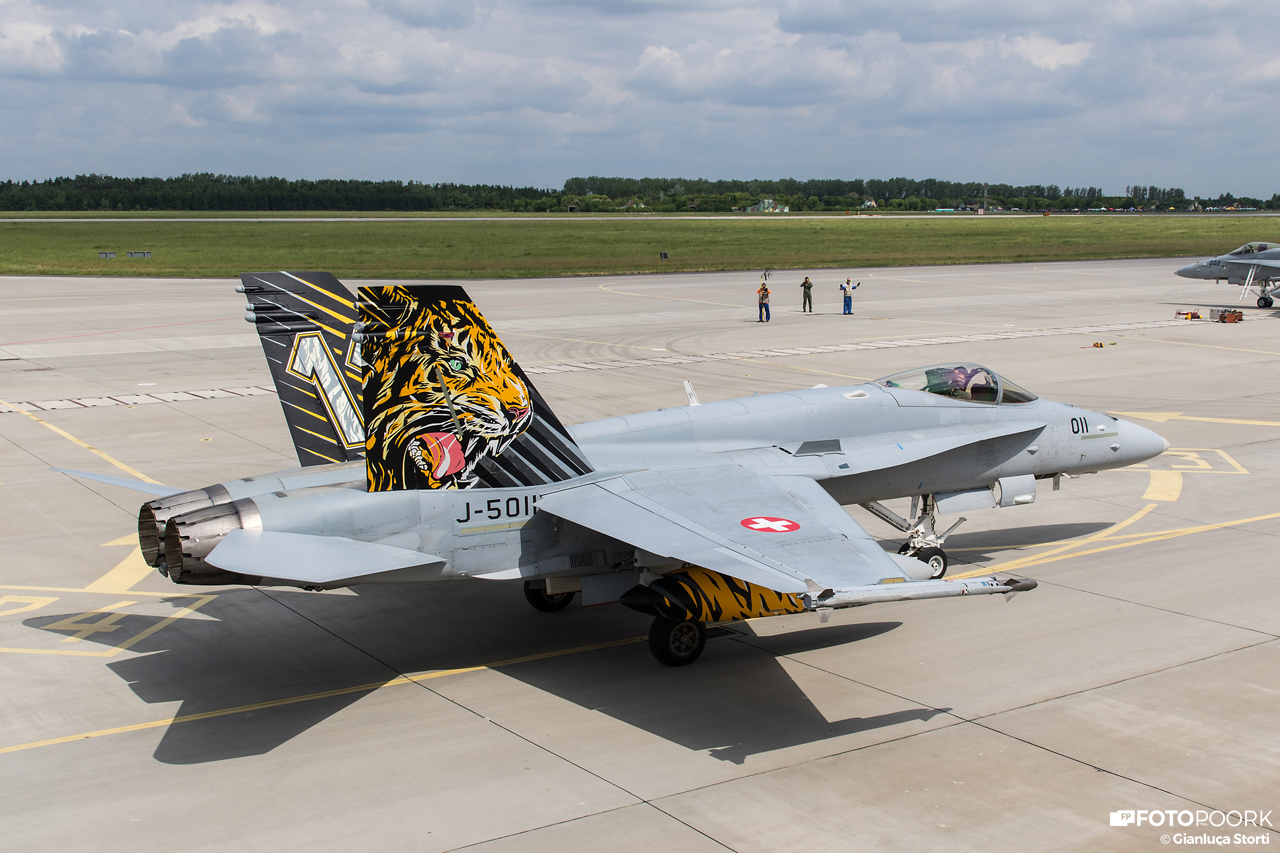 Following the same line, after a break-off to get access to the flight line, here are hosted the 4 Tornados of the Luftwaffengeschwader 51 “Immelman” of Schleswig-Jagel and the 7 McDonnell Douglas F/A-18 C/D Hornet of the Fliegerstaffel 11 of Meiringen, Switzerland. At the end of the paraparket, past the taxiway that leads to the school shelters, the area of the Belgian and Dutch F-16s, the 3 examples of the 31st Smaaldel of Kleine Brogel and the 5 of 313th of Volkel.

As many as 79 fighters are on the various aprons, service areas and shelters and 15 helicopters of 5 nations in the assigned spots. What is most impressive in this edition is the feeling that the Poles have organized everything right. Already on this first day with a sparkling wind, the morning wave take-offs are already underway: no less than 50 aircraft on the taxiways and on the runway; the roar of take-offs goes on for a good hour. The planes of 14 NATO countries are here convened for the exercise called “Tiger Meet”. Having participated in various editions in many countries, it is now our turn to show that even the Polish air forces are up to the task.

Two thick waves for every working day – an estimated 100-120 daily missions from the very first days – “Our goal is to do things well and safely, taking care of all the details; increase the operational capabilities, professionalism and interoperability between NATO nations and partners, within realistic scenarios and complex missions of the “joint” and “combined” type through the execution of composite air operations.”

The next day is a glorious day: under a great sun, the fresh air and the blue sky, the activity after a while is growing and growing and we can indulge in new photos from all angles. In the area of ‘cold war’ shelters has been equipped the spotters area. As a good photographer, I realize that the choice of the site was a real flop. Around midday one p.m., in the interval between the morning wave and the afternoon’s  we go with our powerful means, more than the car, I speak of the badges that have given us that open all the doors, I go to the spotter area.

The discontent floats in the air, you cut into slices, indeed now we are at the moment when even the disappointment is deflating, many are already lined up to leave you have the sun, but it is in everyone’s face, the runway far away. Sadly, but the organizers didn’t had any other choice for another location. 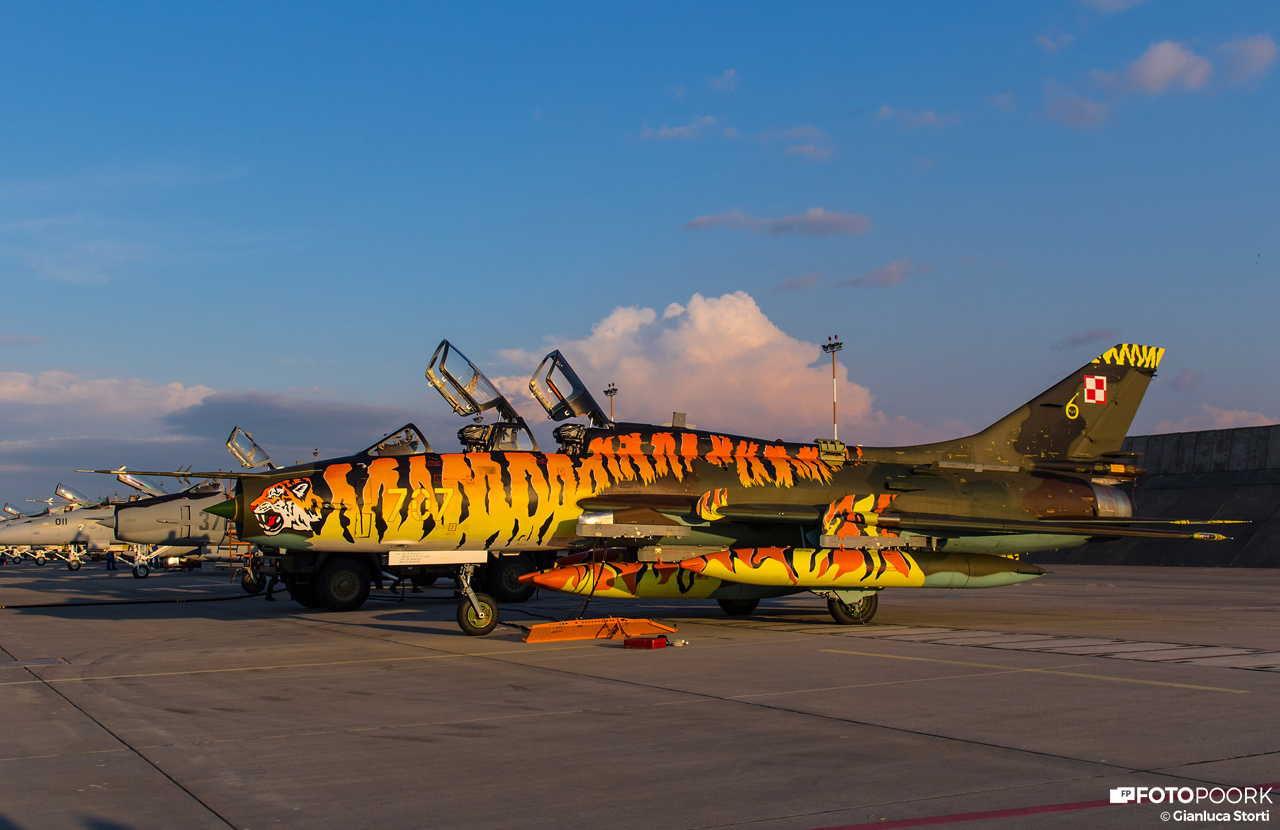 I go back to the operating area where the second wave is already heating the engines. Looking for a new sensational shot, the choice falls in the areas of shelterette: car, gas, speed up. The French are completing the latest checks on a Rafale, and in the area in front of a group of helicopters, Italians, French and an English Puma are ready to go out. They are in hovering, the light is good. At work.

After a half hour, calm again, the specialists go back from the flight-line for a bit of relax, a Coke, a cigarette, a chair, calm…

Returning to the apron in front of the control tower, I ask Franco to observe an ‘anomalous’ landing, in the sense that for the first time in these days I see an open parachute. Emergency landing? No … but there is something different that immediately I do not understand … The parachute is square … They are not ‘ours’. In fact, on the runway I can see a second object, which I baptize: SU-22! Here are the special guests that have to attend the Poznań-Ławica airshow. Let’s go to the flightline where the Swiss a/c are parked. The Su-22s are there, the stunning SU-22 two-seater in Tiger scheme from the Pitot tube to the exhaust and the single-seater spare in the new gray livery I’ve only seen in glossy magazines. The Magical Circle of photographers is already there, we are the last, the scene is to be captured, the grazing light of the afternoon illuminates the Sukois, the special has almost the colors ‘burned’ by the low sun. Really two special guests! 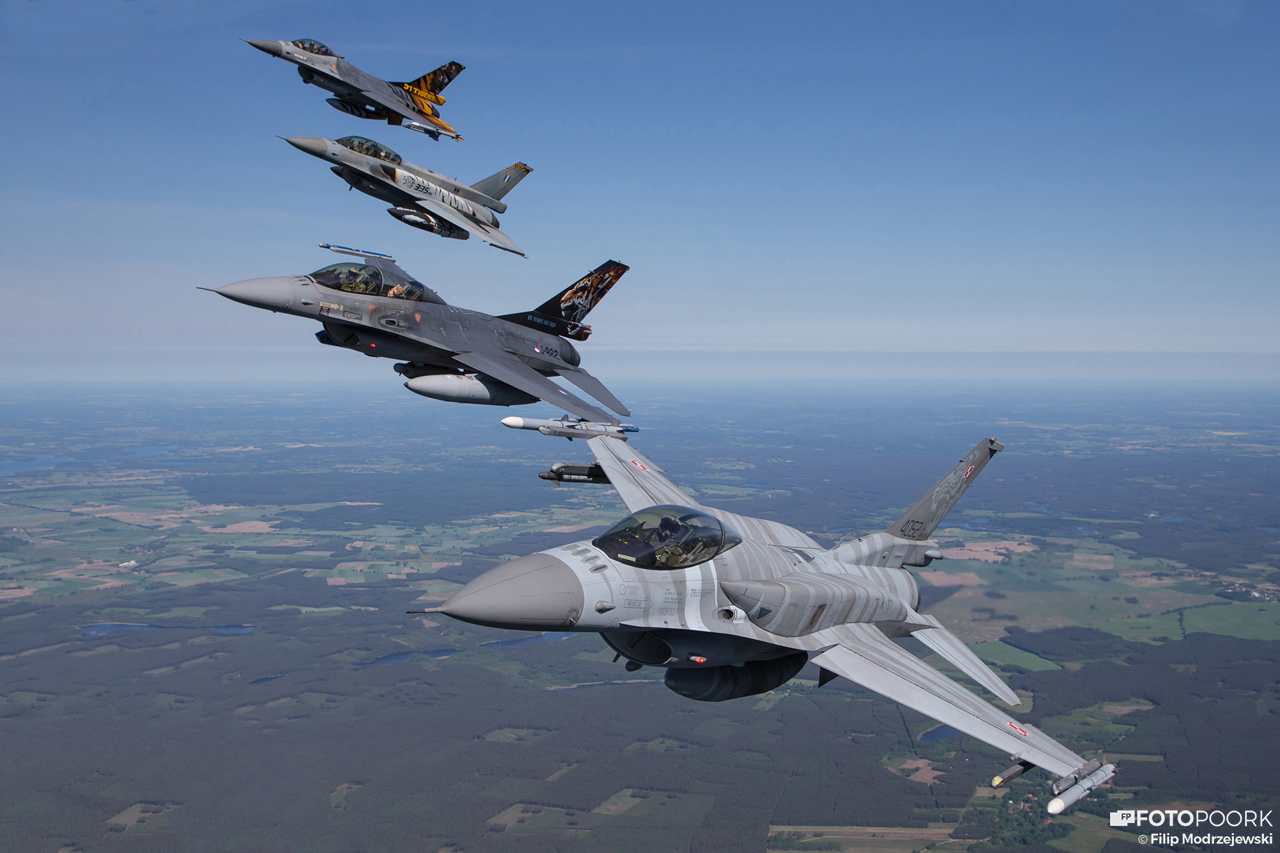 We did it. Then thanks everyone, too many. My mind go to a small talk from the movie ‘Top Gun’ where Goose, the first day of the theoretical lesson, in response to a teaser companion, answers ironically …

– Whose butt did you kiss to get here?- The list is long but distinguished.- So is my johnson…”  Oh yes, in the list we will put: Kpt. Krysztof Nanus, P.A.O. of the base, Kpt. Grzegorz Jasianek, P.A.O. of the 2nd Wing and head of the Information and Press Center N.T.M.18, Col. Szczepan Gluszczak from Polish Armed  Forces; the T.Col. Fabio De Luca, commander of the 12th Group of Gioia Del Colle and T.Col. Antonio Massara,

Last but not least I should like to mentionthe new liveries, a ‘must’ for this exercise. Almost all the squadrons presented themselves with one jetplane in a special paint scheme. But of course the photos will make a better effect than my words: an excellent weather – excluding an intense wind of the first day and the dark sky – allowed everyone to enjoy the renewed imagination of the ‘painters’ who trounced all over their dreams, letting run their fantasy and inspiration.

Autorzy
Filip Modrzejewski
Chief Editor of the Foto Poork aviation outlet. He has accumulated huge amounts of Air-to-Air photography experience, logging more than 500 hours of photo-shoots in the air. Moreover, he has been into photography ever since, and he is striving to bring unusual photos back from any of the unique events he attends.
Gianluca Storti
Franco Gualdoni