What are the components so that a complex exercise like Iniohos is a good investment of time and resources, both productive, profitable and fruitful, said the Greek Defense Minister, Mr. Apostolakis, at the press conference. Before the effective and integrated use of men and means, more substantial objectives must be achieved:
“Synergy, cooperation and good relations are the necessary qualities to ensure peace and security in our regions; by making real progress in this direction, all those who have a common vision will find the capacity and strength to make a common front to eliminate and reduce common tensions and threats in the Mediterranean area “.

In mid-April the multinational exercise Iniohos 2019 ended on the base of Andravida, North-West area of the Peloponnese, not far from the city of Patras. It had begun on the first of April and saw the involvement of the Israeli air forces, the Arab Emirates, the USAFE, Cyprus, Italy and Greece which fielded all of its fighters, redeployed all at Andravida. Indeed the F-16s of Araxos, a sister base located 30 km from here, had to operate from their own base because the number of aircraft present on site was so high that it was practically impossible to accommodate others.

In details there were:

Not to mention the tankers and electronic planes that operated from other greek bases and other non greek bases. That is, more than 80 planes, leaving aside the entire Greek Phantom fleet, which despite not participating fully in the exercise, occupied Araxos’ respective shelters and F-16s.
If the Croatian Mig-21s had also participated, as had been leaked or hoped for some months before, where would they have found a place? 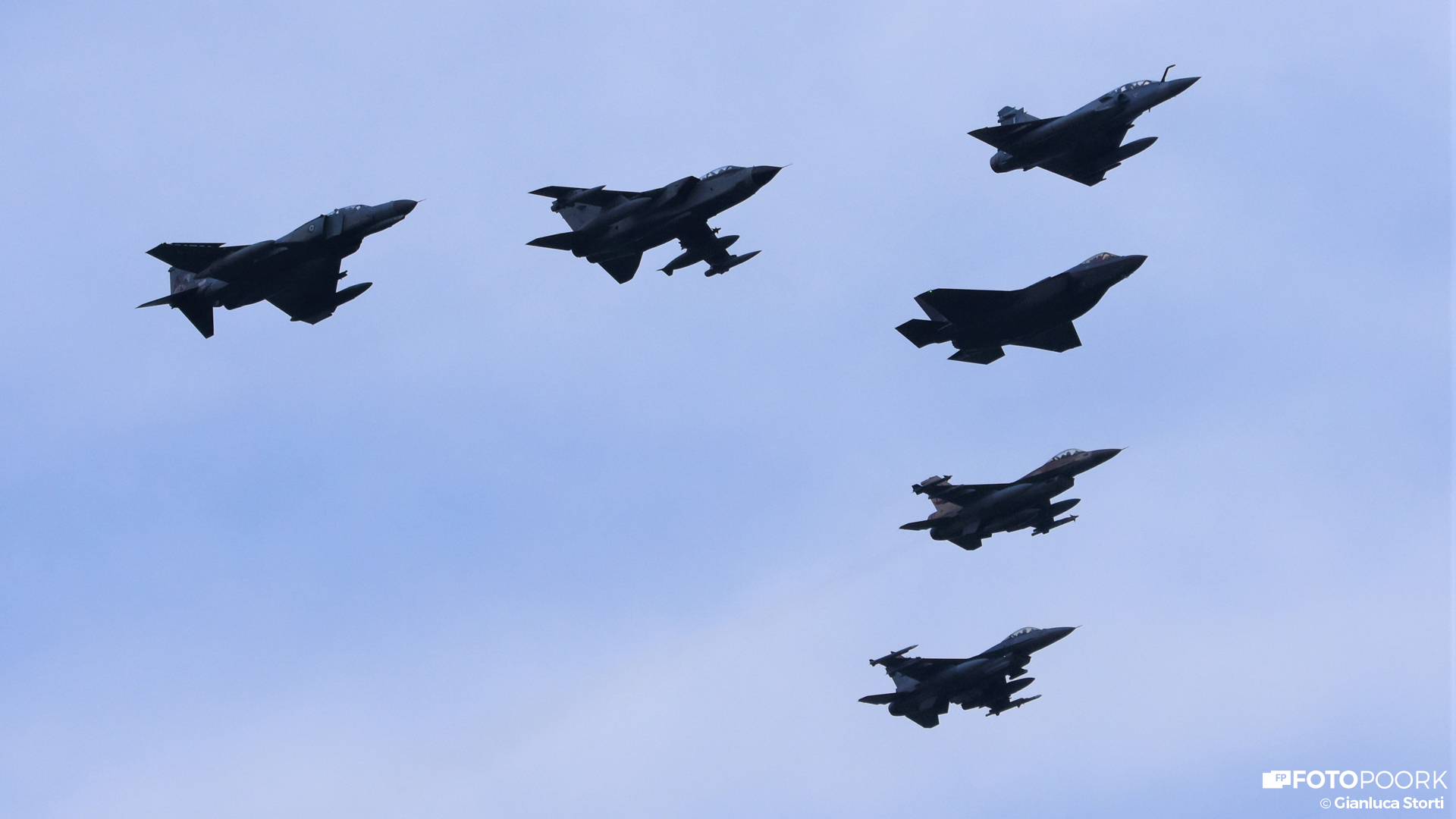 Tornado and F-35 flew a total of about 250 hours in just some 150 missions, in a complex and competitive environment, taking full advantage of all the opportunities of the Keat or Air Tactics Center present here and the training polygons in the surroundings of Andravida, practicing Air To Surface Integration (ATOSI) activities on fighter-bombers of three different generations, with the aim of testing and achieving the integration of the systems, in missions of the COMposite Air Operation type (COMAO), Suppression of Enemy Air Defense (SEAD), Time sensitive Targeting (TST), Close Air Support (CAS), Defensive Counter Air (DCA) and Offensive Counter Air (OCA).

On April 5 in the late afternoon Gen. Giancotti arrived on board a Avanti of the A.M.I. to meet the T.Col. Lodato, responsible for the Italian redevelopment and to check and be informed of the present and future activity of the Italian squadrons deployed. During the various meetings with the Greek and international authorities and meeting the journalists gathered here, he wanted to focus on the advantages that our combat units achieve by participating in a training event like the Iniohos exercise.

Among other things, he wanted to underline that “the training opportunities of the” Iniohos “are excellent. The multinational context guarantees us a very high professional and human return. The comparison with the participating countries not only improves the collaboration and promotes the exchange of experience, but allows the concrete integration of professionalism and weapon systems to cooperate fully in complex scenarios nowadays more and more frequent. Furthermore, we had the opportunity to use fifth generation assets in an international exercise, concretely promoting the interoperability between Tornado and F-35 and their integration with the air assets of the other participating countries.

One of the goals to be pursued with the use of the Italian F-35s, with the execution of the Iniohos, is to obtain the Full Operational Capability for this platform, continuing the intense training campaign that saw the 32nd Wing redeployed recently in Decimomannu for a shooting campaign and on Istrana airbase for a new training cycle on the Bann range in Germany, after having recently been to Nellis in Red Flag 19-2.

The use of the F-35 involves new tactics when one thinks of the difference between this fifth-generation aircraft and the competitors, friends or foes, within the exercise itself. We need to be aware of the low observability of this platform, which is an added ability to achieve results but also a security problem for those who face it during an exercise. For reasons of flight safety, these planes must be less stealth for the air traffic controllers, responsible for the good conduct of the exercise.

This characteristic must be thought of within a group action that seeks a good result from the mission itself: therefore in this transitory time, in these years, in which there is a mix of machines with different observability or stealth capacity, the need that arises it is the integration of the various components of the mission to maximize the result. For example, the F-35s in an attack mission could be used before the subsequent assets are deployed; in a defense mission they should assume a less stealth configuration so as not to render the exercise of the attack of others not “useless” in front of the defenders. All this reminds me that in 1991 during the first Gulf War an American F-15 was the first to shoot down an enemy, in this case an Iraqi Mirage F-1, launching a 60 or 70 km missile. An unequal confrontation.